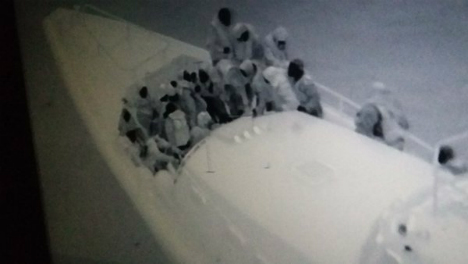 Spanish authorities rescued 25 migrants off the coast of southern Spain on Tuesday morning.

A search and rescue operation had been underway since Monday, when their boat had run into trouble.

The 25 passengers, all from sub-Saharan Africa, included two women – one of whom was pregnant.

“This morning the 25 members of a boat rescued by the coast guard were being looked after in Motril.”

The search effort was “complicated by the thick cloud in the area,” sources from Spain’s Civil Guard told news agency Efe.

The search and rescue operation was carried out by Spain’s coastguard, as well as the maritime department of the Civil Guard.

The migrants’ inflatable boat was found at 2am by a search and rescue helicopter, 7.5km off the coast of Granada.

The Spanish coastguard tweeted that they had located the small boat.

The migrants, who were described by rescuers as being “calm” despite their hours in the water, spoke to emergency services over the telephone to inform them of their location in the sea.

They were taken at 4am to the town of Motril, where they received medical attention and food from the Red Cross before being taken to a temporary immigration reception centre run by Spain’s national police in the port town.