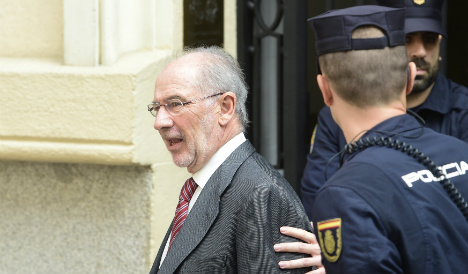 Rato is one of 66 accused in a scandal that allegedly saw executives and board members at Caja Madrid and Bankia – the group whose near-collapse sparked an EU bailout of Spain's financial sector – spend around €12 million ($13 million) on themselves between 2003 and 2012.

No date has been fixed for the trial of Rato and his co-defendants who allegedly benefited from undeclared credit cards for personal expenses between 1999 and 2012 at Caja Madrid, which merged with six other savings banks to create Bankia.

According to media reports the group used the accounts for expenses ranging from safari trips to buying jewellery.

Close to Prime Minister Mariano Rajoy, Rato was forced to quit the ruling Popular Party after the scandal broke in January of last year.

Rato, who also served for a year as deputy prime minister, was finance minister from 1996 to 2004. He then had a three-year stint as IMF head.

Thereafter he was chairman of Caja Madrid and then Bankia from December 2010 to May 2012 as the bank went bankrupt less than a year after listing on the stock exchange. It ultimately required a state bailout.

After the scandal fingered him, he was arrested on April 16th for alleged fraud, embezzlement and money laundering.

Rato could face as much as ten years in jail if found guilty, while Spanish media reports said the accused group as a whole spent some €15.5 million on personal expenses.