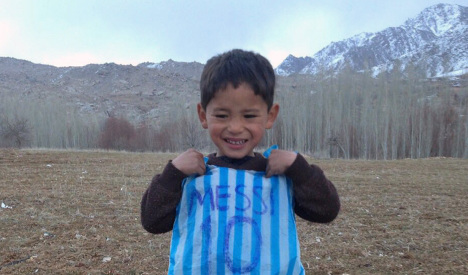 The photos were taken last week by the family of five-year-old Murtaza Ahmadi and show him wearing a plastic bag jersey as he plays football in Afghanistan.

The boy's 15-year-old brother made the improvised Messi jersey from grocery bags discarded by their neighbour and posted the pictures on Facebook, where they have gone viral.

Now, the Barcelona star is hoping to set up a meeting with little Murtaza, the Afghanistan Football Federation (AFF) said on Monday.

“Messi has been in communication with the federation to set up a meeting with the young boy,” AFF spokesman Sayed Ali Kazemi told AFP.

“We are working to see whether Messi will come to Afghanistan or the five-year-old will travel to Spain or they will meet in a third country.”

Jorge Messi, Lionel's father, had told AFP on Saturday that the footballer knows about the photos and “wants to do something” for his young fan.

The boy lives in the Jaghori district of the volatile Ghazni province, near Kabul. Security concerns about Taliban insurgents could pose challenges to setting up a meeting in Afghanistan.

The Spanish embassy in Kabul told AFP that it would do whatever possible to help set up a meeting somewhere in Europe.

Murtaza's father is a poor farmer and has said that he could not afford to buy his son a real jersey, also noting that Murtaza had just a punctured ball to play with.

Under Taliban rule, sports were seldom played and Kabul's Ghazi Stadium was used for executions, stonings and mutilations.