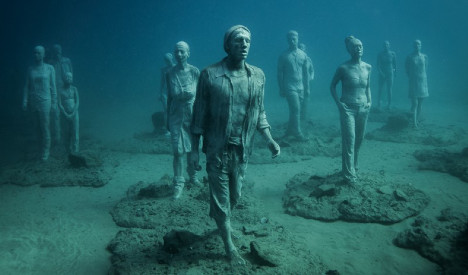 The island of Lanzarote in the Canary Islands set up of the first sculptures in what will be the first completely underwater museum in Europe.

Museo Atlántico – Atlantic Museum – is the vision of British artist Jason deCaires Taylor, who has created similar works in both Cancun, Mexico and Grenada in the West Indies. The sculpture park in Grenada was the first of its kind in the world and has been listed as one of National Geographic's Top 25 Wonders of the World.

Moiliniere Sculpture park, Grenada, West Indies. This it where it all began almost 10 years ago.. #grenada #sculpture…

The museum off the coast of Lanzarote is set to be submerged 12 metres under the ocean, accessible to scuba divers and visible to glass-bottom boats.

The sculptures on display are human forms, some modeled after local residents, and are created to attract plant and animal life, representing the relationship between humans and nature.

Lanzarote officials called the submersion of the first sculptures an “historic day” on Sunday, according to a Lanzarote council statement.

“Today is an historic day for the islands because we open a door to the ocean that strengthens our position as a unique tourist destination and makes us much stronger and more competitive compared to other tourist destinations nearby,” said Lanzarote council president Pedro San Ginés in the statement.

“The island is going to show the world one of its most precious secrets – the bottom of our sea,”

The first sculpture exhibits include a couple taking a selfie, meant for viewers to reflect on new technologies and themselves. Another, called The Raft of Lampedusa, makes a statement about the refugee crisis in reference to the Italian island in the Mediterranean where thousands have arrived.

Taylor said he wanted this exhibit to be a tribute to those who succeed, but also those whose “dreams and hopes remain at the bottom of the sea” according to the statement.

There has been some controversy surrounding the museum locally, according to newspaper La Voz de Lanzarote. The project will cost some €700,000 in public funds and some questioned whether the proper coastline authority had been consulted beforehand.