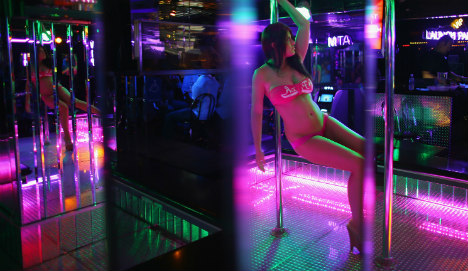 “The sergeant, who showed signs of having consumed an excessive amount of alcohol, tried to enter without paying, which was prevented by the doorman of the premises,” the court document read.

Named as Sergeant José Alberto Nava Cano in Spain's El Pais newspaper, he has been sentenced to a five day suspension for the embarrassing incident, which took place in January 2012 in the town of Noáin, outside Pamplona in Navarra, northern Spain.

After repeatedly refusing to pay up, the group was confronted by the brothel’s owner, who told them to either pay the cover charge or leave, according to Spanish news agency Efe.

The policeman then whipped out his badge and threatened: “I know where you live and if you want, I can take you right now”, seemingly threatening to arrest the man if he did not let the group in.

He then resorted to claiming the group was on an operation, but the brothel’s owner did not believe them, and when the sergeant started raising his voice and making threats, called the police.

Once on the scene, local police managed to calm the incident.

The sentence states that the behaviour of the sergeant was “contrary to the honourable conduct we expect from a Civil Guard sergeant”.