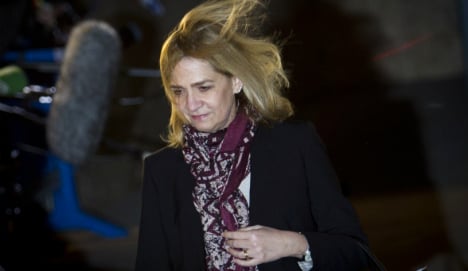 Cristina, 50, is the first Spanish royal in modern times to face prosecution, and her lawyers marshalled a battery of arguments to get the case against her dropped when the trial kicked off on the Mediterranean island of Majorca earlier this month.

The case alleges that her husband, former Olympic handball medallist Inaki Urdangarin, embezzled public funds through a foundation he once chaired. He is also accused of influence peddling, document falsification, money laundering and forgery, among other charges.

Public prosecutors have refused to press charges against Cristina, but under Spanish law private entities can also file criminal complaints, and that is just what anti-graft campaigners “Manos Limpias” – or “Clean Hands” – did.

Cristina's lawyers however cited Spanish jurisprudence which allows the accused to escape trial if the victim of a crime does not back the charges – and in this case the alleged victim is the state.

In a statement, the court in Palma de Majorca said it had rejected these arguments, which means Cristina will continue to stand trial when hearings resume on February 9th and defendants start to testify.

The case involves business dealings by the Noos Institute, a charitable organisation based in Palma which Urdangarin founded and chaired from 2004 to 2006.

The 48-year-old and his former business partner Diego Torres are suspected of embezzling €6.2 million ($6.8 million) in public funds paid by two regional governments to the organisation to stage sporting and other events.

Urdangarin is accused of using his royal connections to secure inflated contracts without competing bids and siphoning off some of the money into Aizoon, a firm he jointly ran with Cristina, to fund a lavish lifestyle.

The couple are suspected of using Aizoon for personal expenses including work on their mansion in Barcelona, dance lessons and even Harry Potter books, which reduced the firm's taxable profits, according to court filings.

If convicted, Cristina – who has denied knowledge of her husband's activities – faces a jail term of up to eight years. Urdangarin faces more than 19 years in prison.