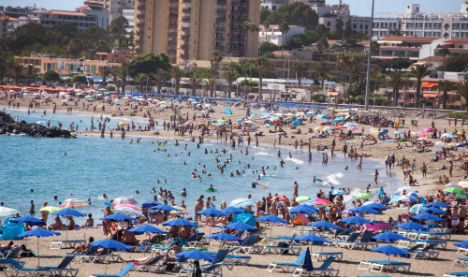 The GDP growth figure – in line with expectations – is one of the best among European countries and will be yet another boost for embattled acting Prime Minister Mariano Rajoy a day after the INE national statistics agency announced a record drop in unemployment.

Further adding to the good news, the INE also said Friday that a new record of 68.1 million foreign tourists visited Spain last year as travellers forego other Mediterranean nations such as Tunisia hit by extremist attacks.

The statistics agency did not detail what the engines of growth were in 2015 for the eurozone's fourth largest economy, which went through five years of on-off recession before starting to recover in 2014.

But according to the central bank, growth was boosted by domestic demand, a healthy tourism sector that represents some 14 percent of Spain's GDP and external factors such as weak interest rates in the eurozone and a plunge in oil prices.

Analysts at Morgan Stanley said however that the main forward-looking indicators suggested that Spain's economy was “on a path of deceleration.”

“The service sector is seeing slower, but still solid increases in employment, and the rate of expansion in new business is now at its weakest level since November 2014,” they wrote.

Rajoy's conservative Popular Party won December general elections but fell short of an absolute majority, forcing him to try to cobble together a government with rival parties that refuse to support him – creating a political deadlock that has lasted for more than a month now.

In his four years at the helm, Rajoy implemented drastic spending cuts and tax rises to steer Spain away from collapse, prompting the recovery but also damaging inequalities that cost him many votes at the elections.