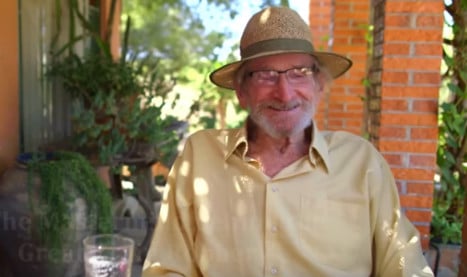 Gordon Goody during an interview for documentary. Screenshot from A Tale of Two Thieves

He was thought to be the last surviving member of a gang that in 1963 pulled off the crime of the century to get away with £2.6million – equivalent to more than €50 million today.

He died at his home in Mojacar, the seaside resort where he had lived for more than 30 years.

“He passed away at around six this morning surrounded by his friends,” a spokesman from Mojacar town hall told The Local on Friday.

The town hall issued an extraordinary tribute to surely one of the most notorious residents of the town.

“All who knew him were struck by his friendliness, his love for his friends and family and the many pets he rescued from the street,” read the official statement from the town hall.

“He was a complete gentleman far removed from the image that those who didn’t know him might have had from those difficult years that marked a large part of his life.

“We will always remember his smile and his big heart that was always open to those around him.”

Goody’s health had been failing and in recent years he cut a frail figure, accompanied always by an oxygen tank at his side, one Mojacar resident told The Local.

Jessica Simpson, a local councillor from the town that has a majority of expat residents wrote: “R.I.P Gordon Goody. A true legend has left on his last train ride to the sky… Your love, light and laughter will remain in our hearts forever more. You were loved and admired by many and will be sadly missed,” she wrote on her Facebook page.

R.I.P Gordon Goody. A true legend has left on his last train ride to the sky… Your love, light and laughter… https://t.co/WYZuph6vYJ

For some fifty years following the Glasgow train robbery, Goody had stayed silent on his role in the heist, only opening up about it in a 2013  documentary entitled “The Great Train Robbery: A tale of Two Thieves”

Dubbed the Great Train Robbery, the 15-strong gang held up the Glasgow to London Royal Mail train at Bridego Bridge in Buckinghamshire.

But it wasn’t a victimless crime as the train driver, Jack Mills, was coshed over the head with an iron bar during the robbery. He never fully recovered from his injuries and died seven years later.

Goody was sentenced to 35 years and served 12 but insisted that although he was the mastermind and instigator of the heist, the evidence that put him away was faked. “I was fitted up,” he said in the documentary.

He claimed that most of the money from the job had disappeared by the time he got out of prison, allegedly spent by his best friend.

After his release from jail in 1975, Goody moved to Mojacar where he set up a beach bar called Kon Tiki. He lived with his long term partner Maria and a motley pack of rescue dogs.