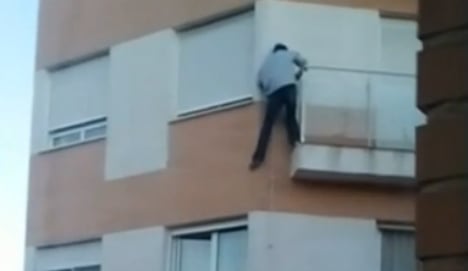 He was spotted by neighbours who filmed him climbing up the outside of the building with the help of a rope, when he lost his footing on a window ledge and plunged four floors to the pavement below.

The 52-year-old man, originally from Ecuador, fell to his death on Calle Doctor Buardes at around 7pm on Wednesday.

In the video he is seen tentatively stepping off the balcony and hanging on the rope for a few seconds before losing his grip and plummeting to the ground.

Voices behind the camera are heard exclaiming: “He's fallen, he's fallen to the ground.”