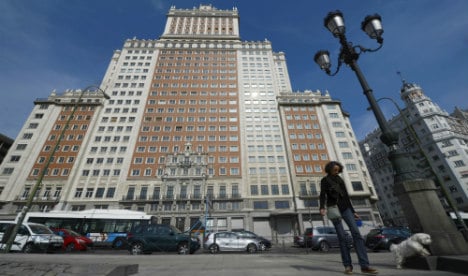 In a statement, the real estate and entertainment company also denied reports that Wang complained he had been treated “like a dog” by the city's government in negotiations.

Wanda acquired the 25-storey Edificio España, built in the 1950s under the dictatorship of General Francisco Franco, in June 2014 for €265 million (now $288 million) and reportedly wanted to turn it into a hotel and shopping centre.

According to Spanish reports, city authorities are refusing to let Wanda demolish the building's facade before reconstructing it.

Citing Spanish media, the state-run Global Times newspaper said on Thursday that Wanda has started dismissing employees in its Madrid office after talks with the city government failed.

“I have never been so badly treated in my life,” Wang was quoted as saying by Spanish news website Periodista Digital. “I've been treated like a dog.”

But Wanda vehemently denied the report, saying it was “seriously inconsistent with the facts”.

“No such negotiations as mentioned by the report took place between Wanda and the Madrid government and it is impossible for Chairman Wang Jianlin to make such statements,” it said.

Wang was widely listed as China's richest man last year, but according to Bloomberg Billionaires he has lost $9.5 billion in the stock market turmoil since the beginning of 2016, taking him back to second place, just behind Internet entrepreneur Jack Ma.

Since the end of last year Dalian Wanda Commercial Properties shares have fallen by  more than 20 percent in Hong Kong, while Wanda Cinema Line has slumped by more than 35 percent in Shenzhen.

Wanda has been on a high-profile overseas acquisition spree in recent years, including the $3.5 billion purchase of Hollywood studio Legendary Entertainment earlier this month.

Wang burst into the international spotlight in 2012 by buying US cinema chain AMC Entertainment for $2.6 billion. His group owns more than 200 malls, shopping complexes and luxury hotels across China.