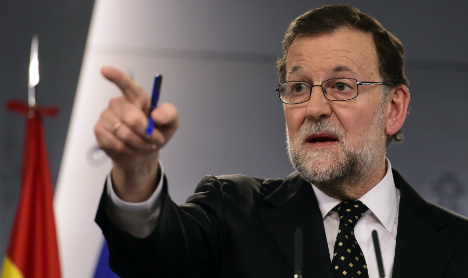 The Popular Party (PP) “is starting to have more members in the dock than in power,” the left-wing El Pais daily sniped on Wednesday, just as Transparency International announced that Spain registered one of the biggest global drops in its corruption index over the past four years.

PP members – some high placed – have been hit by several probes over the past week, just as Rajoy insists he is best placed to lead the country after inconclusive December general elections.

READ: Spain plummets in corruption ranking to among worst in EU

The PP won the polls but without the absolute majority it needed, leaving Rajoy struggling to form a government as other parties refused to support him.

Last week, he announced he had abandoned attempts to establish a government although he has not given up hope of convincing others to form a “grand coalition” of the PP, its rival Socialists (PSOE) and upstart centrist grouping Ciudadanos.

But the very corruption that plagued Rajoy's PP during his four years in power has come back to haunt him.

On Tuesday, police detained 24 people in Valencia in the east, including a former PP regional president, in a case that revolves around allegedly getting commissions in exchange for public work contracts.

Late last week, Deputy Prime Minister Soraya Saenz de Santamaria announced the resignation of one of her main associates in connection with a corruption scandal at a state-run water company he once oversaw.

And PP members are also due to be questioned by a judge over how exactly the hard-drives of former party treasurer Luis Barcenas, who is in jail for embezzlement, were wiped clean before investigators were able to see them.

But Rajoy appeared unfazed on Wednesday.

“There is no reason why this should hinder negotiations,” he said in a televised interview.

Corruption “is what hurt us the most in the last elections,” he acknowledged.

But “we took a lot of decisions over the past four years and so any person involved in a case with these characteristics will immediately be isolated from the party.”

Still, the latest scandals have done nothing for the image of a party hit by graft case after graft case during its four years in power, at a time when many Spaniards were suffering from a devastating economic crisis.

And the very Socialists that Rajoy is trying to woo into a coalition are far from convinced, with Rajoy admitting on television that PSOE chief Pedro Sanchez refuses to meet him.

“If someone thinks that by putting pressure on the PSOE they can get it to support the most corrupt party in Spain so that it can remain in power, he is wrong,” Socialist Senator Oscar Lopez pointedly said Tuesday.

Pablo Iglesias, head of the anti-austerity party Podemos, which came third in the elections, has used the latest scandals to press for a governing coalition with the Socialists that would unseat the PP.

“So that we can put an end to corruption once-and-for-all,” he said in a radio interview, ignoring the graft scandals also hitting the Socialist party.

Even Ciudadanos, which campaigned to end corruption but is trying to act as middle-man between the PP and the PSOE, baulked at the latest corruption cases.

“Rajoy cannot head up the fight against corruption because he did nothing against it,” Ciudadanos chief Albert Rivera said, adding nevertheless that the PP should still take part in negotiations to form a government.