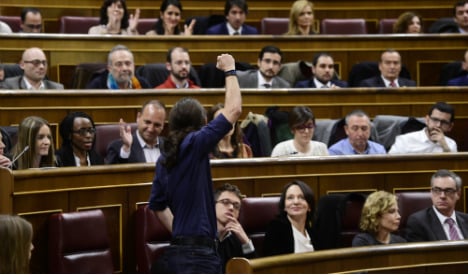 The 69 new parliamentarians in Spain’s lower chamber were designated seats in the upper left hand side of the Congress, in an area they dubbed the “gallinero” (hen house or nosebleed section).

“This is an arbitrary action,” complained Íñigo Errejón, the Podemos number two at a press conference on Tuesday. “They are sending the representatives of five million voters to the nosebleed section, separated from the rest.”

The Podemos representatives stole the show on the first day of the new leglislature causing a stir with their scruffy attire and unconventional hairstyles, and with the appearance of a baby on the front bench.

On that day they guaranteed maximum press coverage after securing the front benches by arriving early at the chamber.

But the seating plan was formalized on Tuesday by the Mesa del Congreso, the body in charge of the internal organization of Spain’s Congress, after a proposal put forward by deputy speaker Celia Villalobos of the Popular Party.

Villalobos made headlines last week with an ill-advised quip about the state of hygiene of some of the new MPs from the Podemos party.

“I don't care if they have dreadlocks. But I want them clean so that they don't give me lice,” she said in a television interview.

Podemos has said it is open to forming a left-wing government with the Socialists (PSOE) to end the political limbo resulting from December's general election.

But negotiations are still underway.