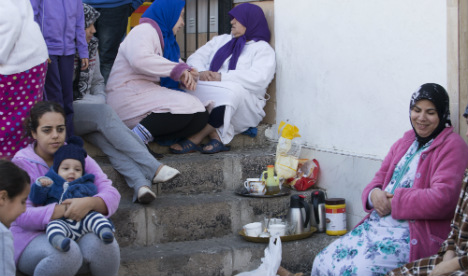 Residents of Melilla, Spain’s North African enclave, have been opting to sleep outside fearing further aftershocks from Monday’s earthquake, which measured 6.3 on the Richter scale and caused millions of euros worth of damage.

Images taken from a supermarket security camera during Monday's earthquake.

Despite police assuring locals it was safe to return to their homes, some chose to sleep outside on Monday and Tuesday nights, including Abdelmonain Minum, 45, who, with his wife and six children, have been sleeping in a car park.

“There’s a rumour there is going to be more aftershocks and stronger movements,” Minum told Spanish daily El País.

“We’re doing it as a precaution, but also because the children don’t want to return home,” said Mimum, who has six children between the ages of five and 17.

The family took a small tent and blankets to the car park, as well as some food and water.

Minum’s fears seemed to be confirmed on Wednesday morning when another earthquake hit Melilla.

Measuring 4.7 on the Richter scale, the quake was felt as far away as Malaga at 7.32am on Wednesday morning.

Its epicentre was located in the Alboran Sea, between southern Spain and North Africa according to data from the National Geographic Institute.

The epicentre of Monday's earthquake.

Monday’s earthquake caused an estimated 26 “light injuries” as well as an estimated €12 million ($13 million) worth of damage to Melilla, one of Spain’s two North African enclaves.

Many locals chose to sleep out in the open or in their cars in Monday night.

“The earthquake woke us up while we were sleeping,” Anisa, 20, who was camping out with her family, told El País.

“The whole house was moving, we left the house terrified.”

Spain’s Interior Ministry has called for calm amidst the continuing aftershocks, but officials have been criticized by locals for not keeping them informed of what is going on.

“Juan José Imbroda (the mayor-president of Melilla) has not come to help us or explain to us what’s going on. Are we second class citizens?” Anisa said.