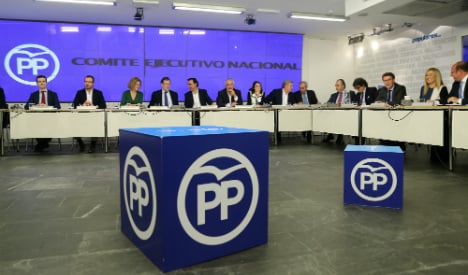 This is the latest in a long list of scandals to have hit Spain's long-established PP as well as its rival Socialists, angering Spaniards and contributing to the rise of upstart groupings Podemos and Ciudadanos which came third and fourth in December elections.

A source at the Guardia Civil police force, who refused to be named, told AFP the detentions were part of “a probe into an alleged corruption network involving different public administrations in Valencia,” revolving around “getting commissions in exchange for public work (contracts).”

The source said 10 people had been detained so far, including the former PP president of the region, Alfonso Rus.

The PP has been in the line of fire as scandal after scandal has embroiled the party.

Just Friday, Spain's Deputy Prime Minister Soraya Saenz de Santamaria announced the resignation of one of her main associates tainted by a corruption scandal at a state-run water company he once oversaw.

The corruption issue cost incumbent Prime Minister Mariano Rajoy a lot of votes in December's general elections as Spaniards grow ever-more exasperated, as it did the Socialists who have also been hit hard by graft cases.