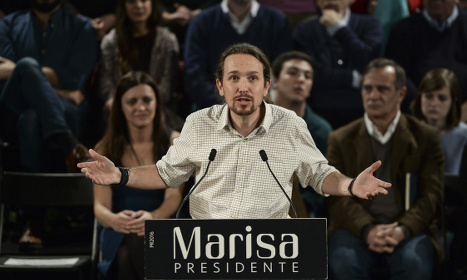 The country has been in political limbo since December's general election, which produced a hung parliament with no easy way of forming a ruling coalition.

Rajoy's conservative Popular Party (PP) won the most seats but fell short of an absolute majority.

Podemos leader Pablo Iglesias said Friday his party hoped to form an alliance with the Socialists and the United Left, a green-communist grouping, as well as land the post of deputy premier and key ministries.

But the Socialists said they would “not enter into negotiations with other political forces to try to find alternatives to a stable government, especially when they are proposed through blackmail and by giving partisan interests priority over the citizens'.”

In a thinly veiled criticism of Podemos, the Socialists said that “in order to build a new national project”, talks on “policies and specific ideas” must be held — not on “tactics, partisan interests or unilaterally imposed (decisions).”

The Socialists added that it would continue to talk to all parties to “evaluate the situation”.

PSOE leader Pedro Sanchez said on Twitter on Saturday that he had spoken with Alberto Rivera, head of centre-right party Ciudadanos, and that they would “stay in touch in the coming days”.

The Socialists also hit out at outgoing Prime Minister Rajoy.

“Rajoy has a constitutional duty … either to submit his candidacy or to give it up definitively,” the statement said.

Earlier Saturday, Rajoy had warned the Socialists against accepting Podemos' offer of working together.

“The government which Pedro Sanchez is desperately seeking would be beholden to Podemos and humiliated by them,” he said, adding that his offer to form an alliance with the Socialists and Ciudadanos still stood.

“This pact has not been possible for the time being as Sanchez has refused to talk … he talked to everyone bar the PP,” Rajoy said, while recognising that the PP needed multiparty backing having failed to obtain an absolute majority.

The PP won 119 seats in the December poll, leaving it well shy of an absolute majority in the 350-seat parliament.

Rajoy had urged a “grand coalition” of the PP, the Socialists who came in second place with 89 seats, and new centre-right party Ciudadanos which took 40 seats.

“There is an alternative — a government formed by the Socialists, Podemos, the United Left and all the pro-independence (regional) parties,” Rajoy said.

“But they will do great harm to our country and will be unable to govern as we have a majority in the Senate.”

He warned that “radical and extremist economic policies can lead the country to ruin”, but vowed the PP would use its absolute Senate majority to “guarantee such wrong-headedness does not come to pass” and “preserve Spanish unity.”

A left-wing coalition government would need the support of tiny Catalan and Basque nationalist parties to survive a confidence vote in the event that Ciudadanos swings behind the PP.

A Socialist Party source told AFP on Saturday that “Pedro Sanchez and Pablo Iglesias will meet and talk — a hand has been held out”, while not giving a date.