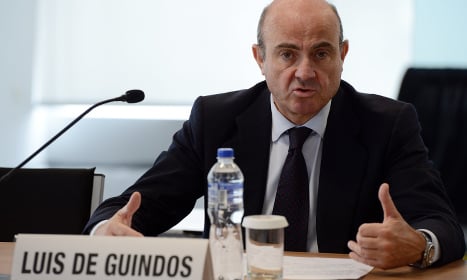 The Socialists and Podemos argue that the Spanish recovery has been at the expense of social welfare as inequalities have risen drastically. Photo: Cris Bouroncle/AFP

Spain has been in political limbo since December elections saw the outgoing, conservative Popular Party (PP) win but without an absolute majority, leaving Prime Minister Mariano Rajoy struggling to form a government due to lack of support from other groupings.

On Friday, he abandoned attempts to form an administration, while Podemos leader Pablo Iglesias — which came third in the elections — proposed establishing a government with the Socialists, making a left-wing governing alliance more likely.

Such a coalition “would be seen as an unstable government, as Podemos and the PSOE are competing for the same electoral space,” De Guindos said in the interview.

When asked whether the markets were more afraid of anti-austerity Podemos or of the resurgent secessionist threat in Spain's northeastern region of Catalonia, he responded that an “unstable government” was more worrying.

“There is concern that reforms will be reversed, that the public deficit won't be addressed, that competitivity will be lost,” he was quoted as saying.

After he came to power in 2011 at a time of deep crisis in Spain, Rajoy implemented drastic spending cuts and tax rises to try to steer the country away from economic collapse.

Spain has now started to recover, but the Socialists and Podemos argue this has been at the expense of social welfare as inequalities have risen drastically.

Anti-poverty agency Oxfam warned last week that out of the OECD group of most advanced or emerging economies, Spain was the nation where inequalities had risen the second-most — far more than even crisis-hit Greece or Mexico.