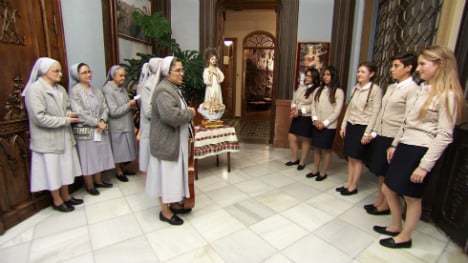 “I want to be a nun” will follow young women who want to devote their lives to God as they join different convents, including a closed order.

The programme that will be shown on Cuatro will let people in on a secret world behind the doors of the convent and follow five young women as they prepare to become nuns.

They will have to give up all the luxuries of 21st century life, including everyday comforts and of course, technology in order to embrace the vows of poverty, chastity and obedience.

The young women are spread out over three convents, in Madrid, Granada and Alicante and will have to take part in the daily lives of the nuns there, including working in a crèche with hundreds of children, living in a 500-year-old closed order and even embarking on a mission into the Bolivian jungle.

“At the end of series, the women will have to decide whether they want to dedicate their lives to God or if they would prefer to follow their faith as lay people,” Mediaset Spain told The Local in a statement.

A spokeswoman for one of the convents taking part in the program, the Sisters of Santísimo Sacramento in Madrid, told The Local that it had been “a great experience so far” but that the convent was forbidden from saying any more by the production company.

The details of the programme were announced in a press conference by the head of Mediaset Spain, Manuel Villanueva, the director of programming for Cuatro, Mariano Blanco and the director general of Warner Brothers ITP, Edi Walter.

They said their aim with the program was to give insight into an “unknown world”.

They also said that in a world where fewer and fewer people are receiving religious vocations the program would open up a debate and maybe “lend a helping hand” to the convents.

The nuns taking part will not be the first to hit the headlines thanks to a reality show. Sister Cristina won the Italian version of The Voice and released her first single, Like a Virgin, while in Spain, Father Damian took part in the Spanish version of the popular televised singing competition.