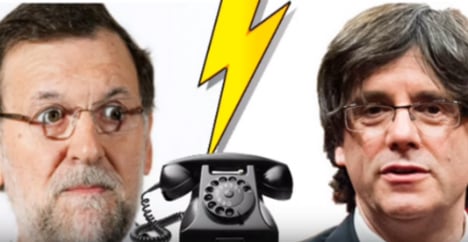 And in a key week for Rajoy, as King Felipe holds talks in an attempt to break the deadlock following the December 20th election, the prime minister admitted he would most likely be pretty available from next week.

The prank was the work of Catalan radio show El matí i la mare que el va parir – literally “the morning and the mother who bore you”, using a Catalan curse to express frustration about getting up early in the morning.

One of the show's members called Rajoy's office and introduced himself as an assistant of Puigdemont, calling on behalf of the Catalan President.

The pranksters were then transferred to a secretary of the Prime Minister, who told the fake assistant and president that Rajoy was busy at the moment, but that they could call back.

The show then called the office again a bit later and successfully were connected with Rajoy and a Puigdemont impersonator introduced himself as the president of Catalonia.

“Good day, how is life?” asked Rajoy of the fake Puigdemont.

The phony responded by saying he was “pleased” to speak with Rajoy and the real Prime Minister then went on to recount how they had first met when Puigdemont was still mayor of Girona.

The prankster said he would like to find a day to talk so that now, as he is the new face of the region, they could “get off to a good start”.

Listen to the radio prank here:

“Very good,” said Rajoy and suggested that they speak again on Monday January 25th, admitting that he might be very free to meet if in fact he failed to be able to form a government.

“Let me suggest something, this week with the King and the talks and such, well I don’t know how things will be but give me a call on Monday,” Rajoy suggested.

“Depending on where we are, and if there will be an investiture,  I have a very empty diary and could set something up within 24 to 48 hours.”

That's when the host, Carles Pérez, interjected and revealed that the whole time the Prime Minister had been talking to an impersonator.

“We are perhaps just as surprised as you are,” said Pérez, explaining that they did not think the prank would work out so well.

“This is now not serious. You all do what you want, but this is not serious,” Rajoy said, his tone sounding somewhat deflated.

The two then thanked the Spanish leader for taking the joke so well.

“Sure, thank you very much,” responded Rajoy.

Jokes aside, the real Puigdemont and Rajoy certainly do have a lot they should talk about as the fiercely secessionist Catalan leader has avoided swearing loyalty to Spain or to the King.

Rajoy on the other hand has been staunchly opposed to Catalan independence, vowing instead to protect national unity and remain firm to the Spanish constitution, blocking Catalan efforts to hold a referendum on their future.

Rajoy has been fiercely criticised for not demonstrating any flexibility on the Catalan issue and for failing to negotiate on the matter.