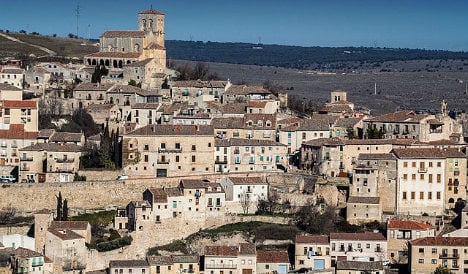 Sepúlveda, one of Spain's most charming towns. Photo: Michael Jean/Wikimedia

Spain is full of so many charming villages and towns that in 2012, they decided to group together to form the association of the most beautiful towns in Spain.

Their goal is to “promote our rural towns while protecting and preserving our cultural heritage”.

In order to qualify, towns must have a population of fewer than 15,000 people and boast an impressive architectural or cultural heritage.

Now, the exclusive group as admitted nine new towns – among the most picturesque and unspoilt that Spain has to offer – but you'd better be quick if you want to explore them before the tourists arrive!

The beautiful town of Laguardia is located in the region of Rioja Alavesa and has a population of only 1,500 people. The town is surrounded by the “king's wall” from the middle ages and its main industry is wine. So if you're a history or wine buff, this is right up your street. The cute town of Liérganes in Cantabria, northern Spain, is home to 2,391 people. It boasts a beautiful “Roman bridge” which was actually built in 1587. Sepúlveda (Segovia)
Sepúlveda is located on the edge of the Hoces del Rio Duratón National Park and enjoys impressive views over the local sierra. It is also renowned for its gastronomy, with local restaurants specializing in roast lamb and suckling pig. Photo: pueblosmasbonitosdeespaña
Sos del Rey Católico (Zaragoza)
The historical town of Sos was the birthplace of King Ferdinand I of Spain – hence the later addition of del Rey Católico (of the Catholic King). It was built in the 10th century and served as a border town during the Reconquista. Photo: pueblosmasbonitosdeespaña
Torazo (Asturias)
The tiny village of Torazo is home to just 247 inhabitants and is characterized by its traditional rural architecture, including ancient hórreos – or granaries made of wood or stone built on pillars that are typical in northern Spain. Photo: pueblosmasbonitosdeespaña
Trujillo (Cáceres)
Trujillo, in western Spain, is home to around 9,000 inhabitants and boasts many medieval and renaissance buildings in its old town. Many of its buildings were built by Francisco Pizarro, the famous Spanish conquistador who conquered Peru. His statue dominates the town's plaza mayor. The town also hosts a cheese festival every May, so if you are a fan of queso, this could be the ideal place to visit. Photo: pueblosmasbonitosdeespaña
Ciudad Rodrigo (Salamanca)
One of the bigger towns on the list, Ciudad Rodrigo is home to 14,000 people. A key border fortress, the town was the site of a 10-day siege by the Duke of Wellington. It also has the dubious honour of being home to one of Spain's weirdest museums, the museum of toilets. Photo: pueblosmasbonitosdeespaña
Peñalba de Santiago (Leon)
Peñalba de Santiago's church is an excellent example of Mozarab architecture from the 10th century. The stone-walled houses in this little hamlet are a little-known treasure and a must-visit for those interested in Spain's rich history. Photo: pueblosmasbonitosdeespaña
Zuheros (Córdoba)
The beautiful white-washed mountain village of Zuheros is home to only around 820 inhabitants. The Murciélagos caves are located close to the village and are home to one of the largest bat colonies on Andalusia.