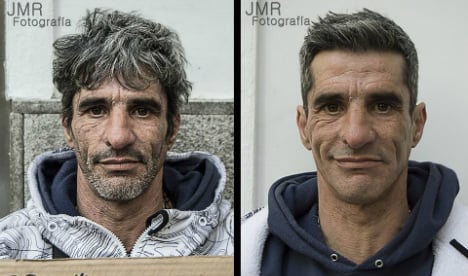 Carlos, who has been living on the street for five months. Photo: uncorteunahistoria

For a month, these three stylists have been giving up their Sunday morning lie-ins to head out onto the streets of Madrid offering free haircuts to the city’s homeless population.

Ana Cuenca, a trained hairdresser, was inspired to start the project with two friends, Cristina Medina and Jonatan Martín after seeing the work of a similar social project in Australia.

They got in touch with the man behind the project, Nasir Sobhani, to ask for advice and shortly after #UnCorteUnaHistoria (a cut and a story) was born. Jonatan, Cristina and Ana, who started the project #UnCorteUnaHistoria

“We saw what Nasir was doing in Australia and we wanted to reproduce it here in Spain,” Ana tells The Local.

“We got in touch with a hairdressing company here in Spain, Industrias Orial, and they donated all the equipment we needed,” Cristina adds. “Everyone has been so supportive.”

The trio tend to set up their mobile hairdressers in some of the city's busiest areas, such as its main shopping street, the Gran Vía or one of its main squares, Plaza de España. “Eduardo lost his job during the economic crisis.”

“The main reaction we get is one of complete surprise,” Jonatan tellsThe Local.

But some people prefer not to have their hair cut.

“There are people who tell us that they prefer to have long hair because it keeps them warm in the cold weather,” says Ana.

But the people who do take up the offer of a free haircut are generally delighted with the results, so much so they insist on compensating Ana, Cristina and Jonatan in some way.

“After they have had their hair cut they are always very grateful to the point of wanting to take us for a coffee or paying for the haircut,” says Cristina.

“But the satisfaction for us is to see them with a smile on their faces.”

One man who had his hair cut recently was Eduardo, 38, originally from Galicia in northern Spain. He studied ocupational therapy and was working in the field of paediatrics when the economic crisis hit Spain and he lost his job.

“I've spent so long not talking, it's good to tell my story,” he told the group as Ana cut his hair.

Another person who recently got a haircut was Azucena, 50, who the group christened “the librarian of the streets” because of her love of reading.

She always has several suitcases full of books, which often prevent her from making it to the city's soup kitchens. “Azucena is passionate about reading,” the group writes on their blog.

The group is hoping to raise awareness of homelessness in Madrid, something which they admit, is a problem worldwide but has worsened in Spain since the country suffered a crippling economic crisis.

“We want to contribute the best way we can by cutting their hair and changing the image of homeless people in Madrid so they feel better about themselves.

“We want to make them more visible through our photographs and make people aware of the reality they are living.”

Social media plays an important part in the project, allowing homeless people in Madrid to tell their own stories, giving them a voice that for so long, has been lost.