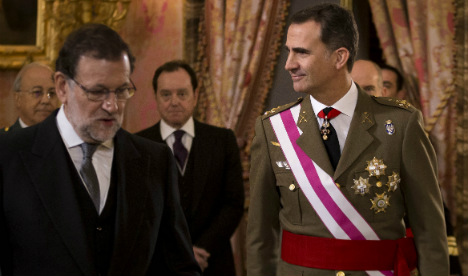 Mariano Rajoy and King Felipe at a ceremony on January 6th Photo: AFP

The political crisis is the biggest challenge Felipe, 47, has faced since he took over the throne when his father Juan Carlos abdicated 18 months ago to try to revive the popularity of the scandal-hit monarchy.

Juan Carlos is credited with helping to smooth Spain's transition to democracy after the death of longtime dictator Francisco Franco in 1975, notably by standing against an attempted military coup in 1981.

But he never faced the dilemma now confronting his son who must propose a candidate for prime minister following a December 20 election which for the first time produced a hung parliament.

Up until now election results did not allow for “speculation, either because a party won with an absolute majority or because it had a big enough majority to attract support,” said Antonio Torres del Moral, a constitutional law lecturer at Spain's UNED university.

All Juan Carlos had to do was nominate the head of the party that had won the most seats in that election, he added.

This time around, the election result put an end to decades of dominance by the conservative Popular Party (PP) and the Socialists (PSOE), who have alternated in power since Franco's death.

Acting Prime Minister Mariano Rajoy's PP won the most seats in the December poll – 123 out of 350 – but fell far short of an absolute majority.

While the monarch has traditionally invited the party winner of the most seats to form a government, he can opt for an alliance of other parties if they can deliver a more stable option.

In a bid to end the impasse, Felipe on Monday began a week of talks with the leaders of all political parties which won representation in the new parliament.

The leader of the party who he will nominate – most likely Rajoy – must then win a vote of confidence in parliament to take office.

If there is still a deadlock two months after this first vote, the king must call fresh elections.

“It is a very delicate moment for the king because if political parties do not provide him with a solution by coming to an agreement, he must take decisions,” said Jose Apezarena, author of several books about Felipe.

The crisis comes as the new king seeks to boost the standing of the monarchy which began to lose its lustre during the twilight years of Juan Carlos' reign.

He outraged Spaniards in 2012 by going elephant hunting in Botswana at the height of the country's recession.

Then his youngest daughter Cristina was accused in a corruption probe targeting her husband. She went on trial on tax evasion charges last week, becoming the first Spanish royal in modern times to face prosecution.

Felipe “doesn't have to take decisions that are as dramatic as his father's, but in the current climate … if he manages to break the deadlock… it would be a good thing,” said Jean-Michel de Waele, a political science professor at the Free University of Brussels.

Still, the road to a resolution in deeply divided Spain may prove bumpy yet.

The king suffered a first snub on Tuesday when representatives of Basque separatist party EH Bildu refused to meet him, considering they were not his “subjects”.