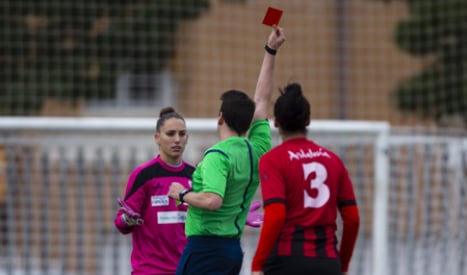 Pavel, with her back to the camera, and the referee. Photo: @sportinghuelva

A footballer in Spain has complained over the “sexist” treatment dished out to her by a referee during a match on Sunday.

Elena Pavel, a footballer for the First Division Sporting Huelva received the come-on from the referee, Santiago Quijada Alcón, during the match in Badajoz, western Spain.

“Better stick to blowing your whistle,” Pavel replied, during the match against rival team Santa Teresa.

Pavel told Spanish news agency Efe on Monday that she thought Alcón was trying “to provoke” her but that she refused to be drawn into “his game”.

“I’ve stopped believing in football, in fair play,” she said.

But the incident ruined the match for the player, who is originally from Romania.

“I feel helpless, humiliated. In the many years I’ve been playing football I’ve never felt so ashamed,” she said.

She claimed that Alcon’s chat up line was only a part of his general bad refereeing during the match, which saw him dole out two red cards to Sporting Huelva players, as well as refusing the team a clear penalty.

Despite being one of the most football-mad nations in the world, Spain has been slow to encourage girls and women to take up the beautiful game.

Its national women’s team only made their World Cup debut in June 2015, with team captain Veronica Boquete not mincing her words on how she saw the team’s chances of winning.

“You could say they are zero,” she said of her team, which ended up getting knocked out of the World Cup in the group stages.