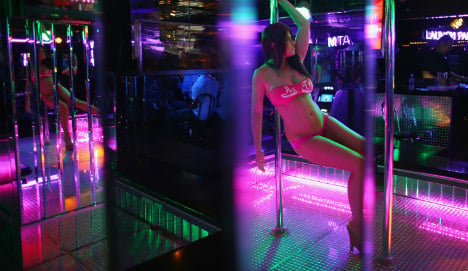 The rather obvious ruling by the military division of Spain’s Supreme Court, has been handed down following an appeal by a policeman who was disciplined after it emerged he had been visiting a 'puti-club' during working hours.

The Civil Guard from Seseña near Toledo was suspended for six-months without pay after being caught in the local El Cruce strip club when he was supposed to be on patrol.

The unnamed officer had spent at hour and a half in the late-night establishment drinking rum and coke and fraternizing with the female staff when he was charged with patrolling the area with another officer.

The manager of the club had telephoned station headquarters to ask if it was standard procedure for a uniformed – and armed – officer to sit drinking alcohol in a strip club.

The officer was discovered there when a patrol car was dispatched to check out the club owner’s complaint and he was subsequently suspended for serious misconduct.

In the ruling issued last week the Supreme court wrote: “Any Civil Guard will be fully away that to visit a hostess club while on duty, regardless of your uniform and carrying a service weapon to consume alcohol is unbecoming conduct and damaging to the institution.”