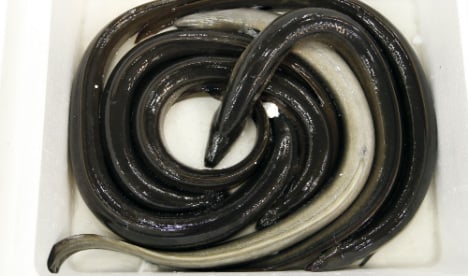 The group of Chinese passengers were trying to smuggle the animals – which are an endangered species – out of Spain and back to China.

They were carrying the 48 live eels in 12 packages packed into four – specially chilled – suitcases.

The passengers were going to board a flight to Hong Kong when their luggage was searched by military personnel, reported Spanish daily ABC.

The animals were taken to the Nature Protection Service (SEPRONA) before being re-housed in Madrid’s Zoo-Aquarium on Wednesday, where they were awaiting special analysis by experts from Madrid’s Museum of Natural Sciences, who will investigate whether the eels are “common or European” – as is suspected.

The European eel is a critically endangered species; since the 1970s the number of eels reaching Europe has declined by as much as 90 percent.

It is not the first strange animal find of the week.

Only last week the environmental unit of Madrid’s police rescued a fox that had been found in the city’s Lycée Français.

Police suspect the fox found its way to the French school by hiding under a car or bus coming from the mountains outside of Madrid.

It was set free in the city’s Casa de Campo park after tests proved it was in good health.