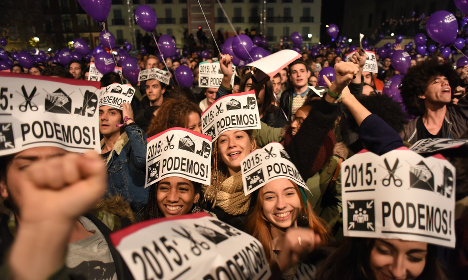 Podemos, which has increased its support, has made fighting corruption and economic inequality the focus of its platform. Photo: Pedro Armestre

If new elections were held the results would be similar to the December vote and the deadlock would remain, although new anti-austerity party Podemos would edge out the Socialists from second place, according to the poll published in top-selling daily newspaper El Pais.

The conservative Popular Party (PP) of acting Prime Minister Mariano Rajoy won 123 of the parliament's 350 seats in a December 20 general election, winning the most seats but falling short of an absolute majority. The Socialists came second with 90 seats.

Two new parties, Podemos and the centre-right Ciudadanos, won a combined 109 seats, ending decades of two-party dominance by the Popular Party and the Socialists and giving Spain a hung parliament in which a ruling majority cannot easily be formed.

Since the election, Rajoy has met separately with leaders of the three rival parties and won implicit support only from Ciudadanos.

Spain's King Felipe VI will on Monday start holding consultations with the leaders of political parties with representation in parliament in a bid to help break the impasse.

Only 33 percent of voters back a new election to end the deadlock while 61 percent would prefer to see an agreement between the parties, according to the Metroscopia poll published in El Pais.

The Popular Party would once again capture the most votes if a fresh election were held, with their support at 29 percent according to the poll. The party won 28.7 percent of the vote in last month's general election.

Podemos, a close ally of Greece's ruling Syriza which has made fighting corruption and economic inequality the focus of its platform, would come in second place with 22.5 percent support, up from 20.7 percent in the election.

The Socialists would come in third as their support would fall to 21.1 percent from 22 percent during the election while Ciudadanos would once again come in fourth with 16.6 percent support, up from 13.9 percent in the general election.

The telephone poll of 1,200 eligible voters was carried out January 12-14. It has a margin of error of 2.9 percentage points.