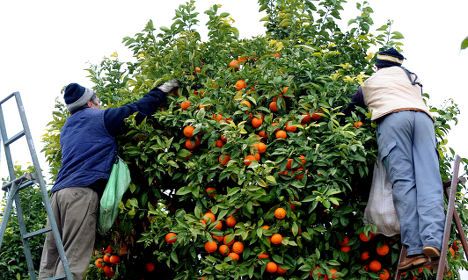 Migrant workers on a farm in Andalusia. Photo: Cristina Quicler/AFP

The arrests were made in Seville in southern Spain after a complaint was lodged in the northern Basque Country where “a man of Romanian nationality said he had been lured by a promise of a dignified salary and a decent job in the (Spanish) agriculture sector,” police said in a statement.

Once he and others had arrived in Spain from Romania, they were “squeezed into often abandoned houses, in deplorable sanitary conditions” where they were “threatened and which they could not leave except to work in the fields”, police said.

“The workers did not receive any kind of financial remuneration for their work,” added police, accusing those behind the exploitation of hoarding the workers' salaries.

Aside from arresting five people in Seville, police conducted several searches and identified the administrator of a company tasked with negotiating work contracts with farmers — which were often merely verbal agreements.

Andalusia, where Seville is located, is Spain's farming heartland.

For years, it has attracted seasonal workers from Africa and more recently eastern Europe who are keen to earn a better living than they might in their impoverished homelands.

Rights groups have frequently lashed out at appalling conditions faced by many of the migrant workers harvesting Spain's fields.