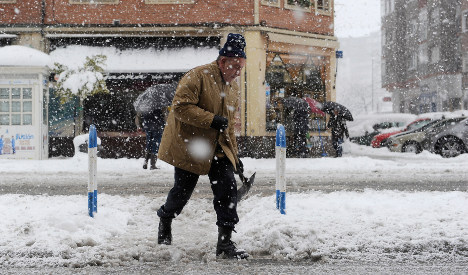 Northern and eastern coastal areas are on high alert for icy weather and high winds, according to the latest forecasts by Spain's weather service Aemet.

Five provinces are on orange alert, meaning “significant risk”, for intense weather conditions starting on Friday and continuing into Saturday: Castile and León, Cantabria, Navarra, the Basque Country and Menorca in the Balearic Islands.

“ATTENTION #warning!: Snow storms, wind and coastal phenomena in areas in half of the northern peninsula and Balearic Islands.”

By Sunday, the orange alert is lowered to “no risk” or a smaller risk for all areas, except for in Girona and Menorca, which are still placed under “significant risk”.

Aragón, Catalonia, Valencia and the Balearic islands are also on alert for high winds throughout the weekend.

An animation posted by the weather service shows the expected progression of storms between Friday and Saturday with black lines representing snow. “Extreme” rainfall is also expected to sweep the southeast up through the centre and to the north.

Spain's Commission for Civil Defense and Emergencies issued an alert on Thursday for northern areas, saying some places could expect snowfall of up to 20 centimetres.

“If you're going to drive, especially in mountainous areas, inform yourself about the weather conditions and the status of the roadways,” the commission advised. “Always bring snow chains or mountain tires, a full tank of gasoline and don't forget to bring your cell phone with its charger.”

The weather service posted a picture of a car covered in snow in Pamplona on Thursday, but noted that the snowfall was much less than last year when it reached 15 centimetres.

Last month was relatively mild for Spain, averaging 10C in all of December, or 2C higher than the norm, according to Aemet.

This warmer weather had a few ecological ripple effects, such as almond trees blooming nearly a month too early and bears in the Pyrenees mountains waking prematurely from their hibernation.

But with snow finally forecast there is no better time to discover Spain's best ski resorts.