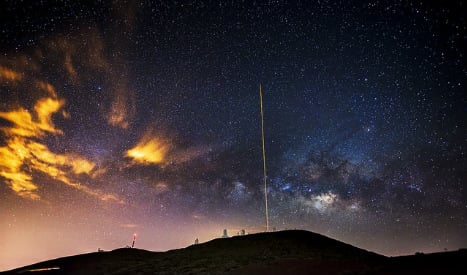 The website will be unveiled at the International Tourism Trade Fair (Fitur), which opens in Madrid on January 21st.

The agency’s website – www.astroandalus.com – will go live on January 21st, first in Spanish and a few weeks later in English, José Jiménez, the project coordinator of Dark Sky Advisors (DSA), which is launching the new travel agency, told The Local.

It will feature “exclusive offers of tourism destinations and experiences related to the observation of the skies and other tours in which science is at the fore – such as ecotourism or geology” he said.

“We are a small, young team of six people who all have training in tourism and science,” he added.

“Andalusia has worked hard to position itself as one of the go-to destinations for astronomical tourism, it has the biggest observatory in continental Europe and a number of starlight reserves”.

Andalusia has more Starlight reserves than anywhere else in the world; the reserves are areas committed to defending the quality of the night sky and access to starlight.

Their main function is to “preserve the quality of the night sky and its associate values, whether they are cultural, scientific, astronomical, natural, or landscape-related” according to the official starlight reserve website.

AstroAndalus will be based in the Centro Tecnológico Andaltec, in Martos, Jaén, the biggest scientific centre in the south of Spain, which undertakes projects across many areas of science and technology, including astronomy.

Andalusia is renowned as one of the best places in Europe for star-gazing because of its excellent conditions; it enjoys almost year-round clear skies and very little light-pollution in the more rural areas of the region.