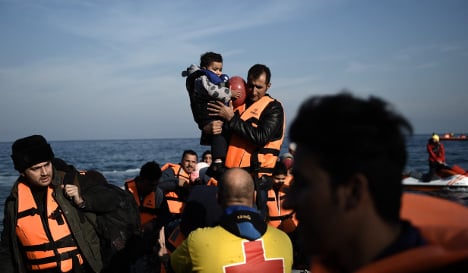 Refugees arrive in the island of Lesbos after crossing the Aegean Sea from Turkey. Photo: Aris Messinis / AFP.

“A preliminary investigation has been opened,” a coastguard spokeswoman said, adding that the suspects were likely to be charged with “attempting to facilitate the entry of illegal migrants.”

Another coastguard source identified the suspects as Spanish.

The five suspects claim to be working for Basque lifeguard group DYA, one of dozens of non-government aid groups helping thousands of refugees and migrants arriving from the neighbouring Turkish coast on a weekly basis.

Two of the suspects were arrested on Wednesday on board a speedboat where coastguards found an unregistered wireless radio which could be used to tap into official frequencies.

Greek authorities have in recent days begun a more stringent inspection of the aid groups, which until now had been given free rein to operate on the island, often leading to rescue coordination problems.

Another seven volunteers – including three Britons, two Americans, a Dane and a Cypriot – had been arrested Saturday on suspicion of stealing lifejackets left behind by refugees.

They were later released after convincing the authorities that they intended to use the lifejackets for makeshift bedding for the refugees.

READ:  'Women put their babies into our arms begging us to keep them safe'

Some 850,000 refugees – mostly from war-torn Syria – risked their lives to cross the Aegean Sea to Europe last year alone, and around 800 drowned or went missing attempting the perilous journey according to the UN refugee agency.