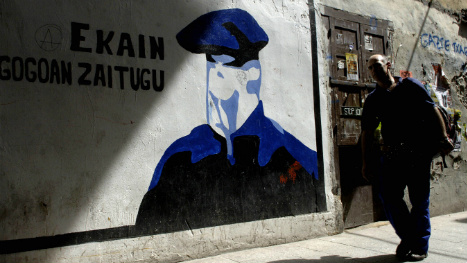 A man walks past an Eta mural in the Basque Country. Photo: AFP

The 35 defendants stood accused of carrying out political activities to back Eta, a band blamed for the deaths of 829 people in a four-decade campaign for an independent Basque homeland in northern Spain and southwest France.

They were charged with “participation in a terrorist organisation” because of activities such as press conferences and meetings even though their parties – which included Batasuna, the now-defunct political wing of Eta – were banned.

“We're relieved, it was unhoped-for,” said Aurore Martin, a 36-year-old French national who was one of the accused.

The trial kicked off in the outskirts of Madrid on December 3rd in a high-security annex of the Audiencia Nacional, Spain's top criminal court, and had been due to last until March.

“The 35 separatists who were on trial admitted the offence of participating in a terrorist organisation and in return prosecutors made a commitment not to seek jail terms for them,” Araiz Urko, the lawyer for three of the defendants, told AFP.

Among the accused was another French national, Haizpea Abrisketa, as well as former leaders of the Batasuna party.

They faced prison terms of up to 10 years if convicted in a trial they had branded purely “political” in nature.

“It is clearly a political persecution trial since the serious crime that the 35 are accused of is of having carried out political work,” one of the accused, Pernardo Barrena, told reporters in December on the day of the first hearing.

Their defenders had also branded the trial “anachronistic” since many of the accused are now members of Sortu, a legal, nationalist party created in 2011.

Eta in October 2011 declared a “definitive end to armed activity” but it has not formally disarmed nor disbanded as the Spanish and French governments demand.

The group wants negotiations over several issues, such as the fate of around 400 Eta prisoners, before it breaks up.