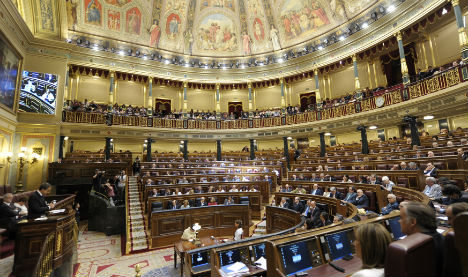 Incumbent Prime Minister Mariano Rajoy's Popular Party (PP) won elections in December but without an absolute majority, ushering in weeks of uncertainty as he failed to form a government in the face of resistance from his traditional Socialist rivals and two upstart groupings.

As such, the first parliamentary session will be closely watched for any hints as to the country's political future, which appears to depend largely on whether the Socialists (PSOE) manage to form an alliance with other parties to unseat Rajoy's conservative PP.

“The one who has the most problems here is Mariano Rajoy… as he doesn't have enough parliamentary allies to form a government,” says Pablo Simon, politics professor at Madrid's Carlos III University.

The lower house will be a very different beast to what it was after the 2011 elections, when it was split largely along traditional conservative-socialist lines.

In the December polls, both the PP and the Socialists lost ground, ending up with 123 and 90 parliamentary seats respectively out of 350 as voters, tired of austerity and corruption, flocked to two new reformist groupings.

Podemos and its allies — a far-left party that emerged just two years ago on the back of a devastating economic crisis — and upstart centrist grouping Ciudadanos won 69 and 40 seats each.

To form any kind of government, Rajoy needs the Socialists' outright or tacit support — which they have publicly, repeatedly rejected.

“The PSOE is the referee, it's the party with the most options,” says Jose Ignacio Torreblanca, director of the Madrid chapter of the European Council on Foreign Relations.

And Socialist chief Pedro Sanchez has been busy.

Last week he went to Portugal to meet with Prime Minister Antonio Costa, whose far-left coalition brought down the ruling conservatives in Lisbon last year, in a sign he may be considering the same sort of scenario.

Analysts say it is looking more and more likely that he will join hands with the more radical Podemos, a close ally of Greece's Syriza.

But this coalition still won't have enough parliamentary seats to form the absolute majority that would bring it to power, and this week Sanchez put forward the idea of an alliance with Podemos — as well as centre-right Ciudadanos.

What happens next is anyone's guess, but all four parties are under pressure to form some sort of government soon if they want to avoid calling new elections in the next few months, particularly after a surprise turn-of-events in the northeastern region of Catalonia.

Over the weekend, the majority secessionist local parliament there finally elected a pro-independence politician to head up the regional government after months of in-fighting, giving fresh impetus to attempts to break away from Spain.

“It would be incomprehensible to take six months to hold new elections when in Catalonia there is a government with a clear, absolute majority, with a roadmap with deadlines and concrete objectives,” says Anton Losada, politics professor at the University of Santiago de Compostela.

The political paralysis that it would create would be “problematic when you have the Catalan issue, economic turbulence and pending reforms,” adds Simon, politics professor at Madrid's Carlos III University.

“So Catalonia is putting more pressure on them to reach an agreement.”