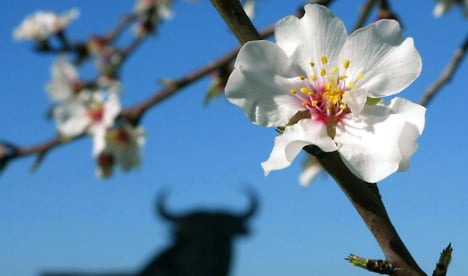 An almond tree in bloom in Mallorca. Photo: Jaime Reina/AFP.

Temperatures in Spain this winter have been warmer than average this winter, averaging 10C in December – 2C higher than the norm between 1981 and 2010, according to a recent report by Spain's meteorological agency Aemet.

This made it the second-warmest December since 1961, and the warmest since 1989.

Though perhaps a relief from the chill for some, it also means a bit of a biological befuddlement for the country's greenery, causing in particular the almond trees to reveal their lovely pale petals as many as 20 days too early, according to experts.

The trees are usually in bloom at the end of January and mid-February, the blossoms lasting just a few days.

“Blooming of the almond trees one month earlier than normal and with the leaves of the last season #arborealstress.”

According to Professor José Egea of Spain's Superior Council for Scientific Research (CSIC), almond trees are more frequently blooming too soon due to higher temperatures associated with climate change, he told The Local.

The weather could also impact plants that flower in the spring between February and April, such as nectarines, of which Egea said many already seem about to bloom.

“The kind of trees that have low needs [for cold weather] are the ones that have surprised us with their rapid flowering,” Egea told The Local.

“This entails a significant risk that the winter 'wakes them up' and that if low temperatures appear, this will jeopardize the flowers, being able to destroy them if it gets down to 0C.”

The flowering of the almond trees has been advanced by between 15 to 20 days ahead of what is normal, and depending on the area, if it is warmer or colder, this can be a problem, Egea told Europa Press, adding that in some parts of the country blossoms could be seen during Christmas.

There is a risk of damage to the trees from freezing if there is a sudden cold snap since they will already have adjusted for warmer weather.

Flowers that require longer periods of cold weather to bloom may not emerge until later in the year than normal, Egea added.

“The risk to trees is very slight with this type of climate change that is happening,” he told The Local, though he added that “climate change seems to be playing a role at the moment in this regard.”
“In order to have more flowers during the springtime, it is essential to have many more trees or shrubbery that produce them and it would not be bad to fight individually and collectively against climate change.”

Note: This story has been updated to add information from Professor José Egea to The Local.

WEATHER
Spain to experience drop in temperatures and snowfall
Url copied to clipboard!