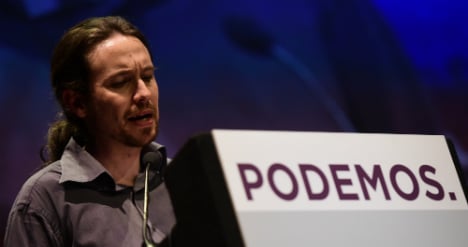 Pablo Iglesias, the pony-tailed leader of the anti-austerity party laughed off the accusations and said he would be “delighted” to place himself “at the disposal” of investigators following a report that police had launched a probe.

According to a report in the Spanish online newspaper El Confidencial, Podemos is alleged to have received some €5 million ($5.4 million) from media companies administered in Spain by Iranian regime-linked businessman and academic Mahmoud Alizadeh Azimi.

El Confidencial alleged that the companies concerned inflated sums paid to firms linked to Podemos for broadcasting services. And that the cash was channelled to the organization from Iran through third countries including Dubai and Malaysia.

Podemos, which campaigned on an anti-austerity and anti-corruption platform, secured 21 percent of the vote in the general election on December 20th to become the third political force in the Spanish parliament.

The allegations centre on the fact that Iglesias, 36, a former political science lecturer, has been hosting Fort Apache, a television talk show on Hispan TV, the channel funded by the Iranian government.

According to El Confidencial, funds were siphoned from the Iranian government to the party under the guise of his work at the channel using inflated invoices.

Under Spanish law, it is illegal for parties to receive political donations from foreign governments.

Iglesias insisted on Tuesday that Podemos' finances were clean and transparent and its accounts had been externally audited.

“We are glad that the UDEF is investigating this matter and are at their disposal,” he told journalists on Tuesday.