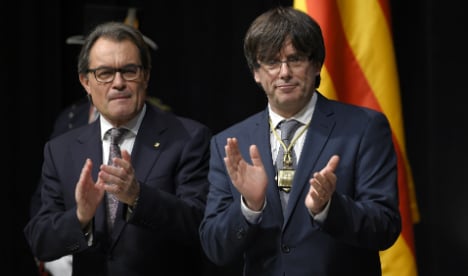 Puigdemont,a 53-year-old journalist and convinced secessionist, did swear allegiance “to the Catalan people” during a solemn ceremony in regional capital Barcelona.

READ: Ten things you need to know about the new president of Catalonia

Outgoing regional president Artur Mas then formally handed over the medal of office to applause from the assembly at the government palace.

Spanish Interior Minister Jorge Fernandez Diaz was among onlookers – but notably did not applaud Puigdemont, invested Sunday by absolute majority in a regional parliament dominated by secessionists.

Puigdemont, who permitted himself a “long live free Catalonia” on Sunday, did not outwardly call for independence Tuesday but alluded to it as he complained that the Catalan identity was “disparaged” and “we need a tool to guarantee this.”

He will now draw up a government team composed of pro-independence politicians of various stripes.

Puigdemont was elected president of Catalonia's semi-autonomous government at the weekend by the region's predominantly pro-independence parliament after secessionist lawmakers finally agreed on a new leader after months of in-fighting.

Mas' five years at the head of the region brought him into regular conflict with Madrid.

But the austerity measures he imposed during his presidency and the corruption scandals linked to his party angered the CUP, which opposed him heading up the region again.

Mas initially insisted on staying on, creating a stalemate that prevented a new regional government from being formed.

But in a surprise last-ditch move, he agreed to step aside on Saturday in favour of the relatively unknown Puigdemont.

But after years of fruitless calls for greater autonomy on the taxation front – Catalonia complains it pays more to Madrid than it gets back – the region lurched towards separatism.

Puigdemont will be tasked with working on developing a regional treasury and social security system, with the aim of achieving complete independence by 2017.

According to a spokesman for the local economy department, people are already being recruited for the task ahead.

In charge of the regional economy will be Oriol Junqueras, leader of the centre-left ERC party which joined Mas's separatist alliance for the September polls.

Raul Romeva, meanwhile, a former member of the European Parliament, will supervise the region's “foreign relations.”

Spain's Prime Minister Mariano Rajoy has pledged to fight for national unity and warned that “the government won't allow a single act that could harm the unity and sovereignty of Spain.”

Catalonia's eleventh-hour success in forming a government comes at a bad time for Rajoy, who is struggling to form his own cabinet after inconclusive December elections.