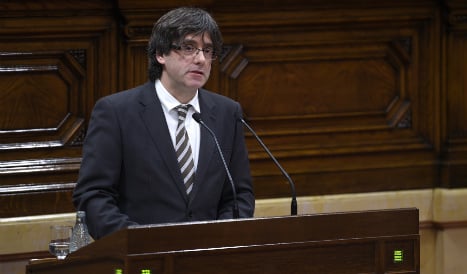 Saviour of the independence movement

Relatively unknown outside of the northeastern region, Puigdemont emerged as the saviour of the independence movement when on Sunday he became the new president of Catalonia after winning a vote of confidence in the regional parliament.

He emerged as the eleventh hour candidate to break an impasse between separatist parties over who should lead the new government following the September regional elections. A last-minute agreement was struck just hours before a legal deadline would have meant calling new elections.

He has been tasked with leading the northeastern region to independence from Spain within 18 months.

#CarlesPuigdemont is due to take office as President of the Government of #Catalonia tomorrow at 7pm. @KRLS pic.twitter.com/0dcEtiRUou

Puigdemont was born on December 29, 1962, the second of eight siblings and was brought up in the village of Amer in Catalonia where the independence flag flutters from above the doorway of the family bakery.

“We're a pro-independence family through and through,” his sister Anna, who runs the business, told AFP. How to say his name

The appointment of the floppy haired leader sparked a torrent of jokes on social media as different commentators struggled with the correct pronouncian of the Catalan name.

For those looking for the definitive pronounciation, one twitter user came to the rescue:

Puigdemont studied languages at the Colegio Universitario de Girona and speaks English and French as well as Catalan and Spanish but didn't graduate. He also speaks Romanian thanks to his wife Marcela Topor who is from there and with whom he has two young daughters.

The 53-year-old embarked on a career as a journalist, serving as editor-in-chief of Girona-based Catalan-language newspaper El Punt Evui before setting up the English-language newspaper Catalonia Today, a publication which is now edited by his wife.

In 1980 he joined the centre right separatist party which evolved into Democratic Convergence of Catalonia and was elected a member of the Catalan regional parliament in 2006.

In 2011 he ousted the centre-left socialists from power in Girona, becoming the first non-socialist mayor of the town in over thirty years.

When the CDC joined up with other separatists to become the Junts pel Si grouping Puigdemont became number four on the list. Puigdemont as mayor of Girona is widely considered to played a key role in securing the northeastern city as a location for Game of Thrones. The blockbuster HBO television show filmed part of Season 6 in the city last autumn, bringing a boost in tourism.

Artur Mas was forced to step aside after the far left CUP – whose support was needed by the Junts pel Si coalition to form a government – refused to accept him as leader in part for his austerity measures but also for the corruption scandals tainting his leadership.

Puigdemont has none of the same associations and is deemed more acceptable for his fresh blood and long-term commitment to the independence cause.

In the shadow of Artur Mas But Puigdemont is still very much in the shadow of Mas who although he has stepped aside has said he will still remain active in politics and the new leader even used his investiture speech to state that he “would be counting on Mas to help him”.

An adversary to Mariano Rajoy

As the new leader of Catalonia he was swift to show he meant business stating that this was no time for “cowards”.

“We need… to start the process to set up an independent state in Catalonia,” he told parliament stating his commitment to pushing the region forward on its roadmap to independence.

Mariano Rajoy, who is battling to form a government after his party lost their absolute majority in the national parliament in last month's elections was quick to issue a rebuke.

“The government won't allow a single act that could harm the unity and sovereignty of Spain,” he warned in a live televised appearance in Madrid on Sunday.

But with Rajoy's own future far from clear, Catalonia with a new leader at the helm promises to stir up nothing but trouble for Madrid.