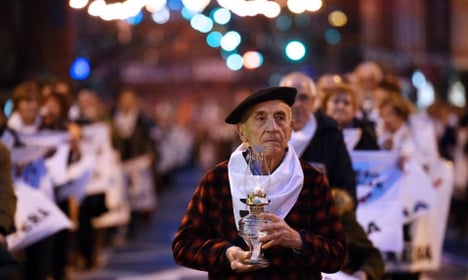 Families of the convicts, who are dispersed across 73 prisons in France and Spain, led the march in the Basque region's most populous city. Photo: Ander Gillenea/AFP

Families of the convicts, who are dispersed across 73 prisons in France and Spain, led the march in the Basque region's most populous city.

A banner called for “Basque prisoners in the Basque country” while the crowd chanted for those being held to be brought home.

Joseba Azkarraga, spokesman for a group defending the rights of ETA-linked prisoners, called on politicians “to end of the suffering of thousands of families who are affected by the dispersion”.

Prisoners in ill health should be released, he added.

Organisers claimed some 70,000 people attended the rally and an AFP photographer confirmed several tens of thousands were at the event.

A simultaneous rally was held in Bayonne, the largest city in the French Basque country, which organisers said drew 10,000 people but the police said was attended by 7,500.

The ETA (Euskadi ta Askatasuna, or Basque Fatherland and Liberty in Basque) has claimed responsibility for the death of 829 people over 40 years, but renounced violence in its struggle for independence four years ago.

The organisation has refused to disband, largely so it can continue to represent members and allies still being held in prison.