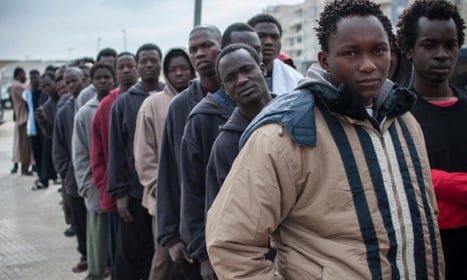 Would-be migrants line up outside the police station to register, in the Spanish enclave of Melilla. Photo: AFP/Blasco de Avellaneda

The Moroccan Association for the Integration of Immigrants, which is based in Malaga in southern Spain, said six migrants had been killed since December 25 trying to make the dangerous crossing.

Three migrants drowned and 19 others were hospitalised on Christmas Day attempting to enter the territory by swimming from Morocco or scaling a barbed-wire fence, the rights group said in a statement.

Those hurt and killed were part of a group of over 300 migrants who were trying to reach Ceuta, which is located across the Strait of Gibraltar from mainland Spain.

A total of 185 migrants managed to enter the Spanish territory but a “large group” was arrested by Moroccan authorities and released in cities in southern Morocco, the statement said.

Another three migrants drowned on Monday and about 20 were hospitalised when hundreds of migrants once again tried to cross into Ceuta from Morocco, the association said.

Two men and a woman are in critical condition and will need surgery to repair fractured bones in their legs and hands, it added.

“Two of the victims said the fractures they suffered were due to the violence and abuse exercised on the part of security forces against them,” the statement said.

About 250 migrants who tried to enter Ceuta at this attempt were arrested by Moroccan authorities and taken to cities in southern Morocco, including several who were in critical condition, it added.

The association said it was “extremely worried” by the rise in the “acts of violence against migrants in border areas of Ceuta” and called for an investigation into the actions of security forces in the region.

Ceuta, along with Melilla to the east, are Spanish territories on the northern coast of Morocco that together form the European Union's only land borders with Africa.

Spain fortified fences in the two territories last year in response to a rise in the number of migrants trying to jump over the barriers from Morocco.

In February 2014, 15 migrants drowned in the Mediterranean after dozens tried to enter Ceuta by swimming from a nearby beach.

Human rights groups and migrants said the Spanish police tried to keep them from crossing into Spanish territory by firing rubber bullets and spraying them with tear gas.

Madrid has since said that its guards are now banned from using rubber bullets to repel migrants.