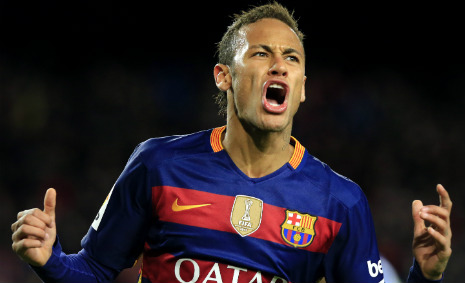 According to the LFP's report, monkey chants were aimed at Neymar after he had been flagged offside in the 14th minute.

The anti-violence commission will decide if any action is to be taken against Espanyol with possible sanctions ranging from a fine to part or full closure of their Cornella-El Prat stadium.

“I haven't listened to the chants, I don't listen to things off the field, I just play football,” Neymar said on Monday.

Former Barca presidential candidate Toni Freixa was first to condemn the chanting on Saturday when he posted on his official Twitter account: “I hope the racist chanting towards Neymar is reflected in the referee's report.”

Yet, there was no mention of it in Jose Luis Gonzalez's report and Barca boss Luis Enrique refused to comment on the incident afterwards.

“These chants of 'uh, uh, uh' I hear every Sunday, above all with Cristiano, and they are not interpreted in any way as monkey chanting,” he told Barcelona daily Sport.

“If it was like that, we would go for those that have to be sanctioned, but it would need to be shown that it was monkey chanting and it wasn't.”

The claims are just the latest fallout from two bad-tempered derbies between the sides in the past five days.

Espanyol had two men sent off as Barca gained revenge for dropping points at the weekend with a 4-1 win in the first leg of their Copa del Rey last-16 tie on Wednesday.

However, Barcelona's Luis Suarez could be handed up to a three-game ban after he was cited in the referee's report for aggressively confronting the Espanyol players in the tunnel after Wednesday's match.