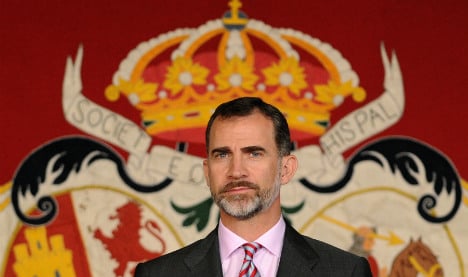 The council passed a motion to downsize the image of King Felipe VI to one little bigger than a passport photograph.

But their act of defiance has led to a legal complaint being filed by the state prosecutor in Tarragona.

All 17 town councillors of Torredembarra, a small municipality outside of Tarragona in Spain’s northeastern region of Catalonia have been called to appear before a judge for passing the motion to downsize the portrait of the monarch. The council is run by the far-left separatist party CUP, which stands for an independent Catalonia and which is currently blocking the candidature of Artur Mas as the region’s leader,  making it likely that fresh elections will be called.

Lluis Suñé, an independent councillor complained that the investigation into the tiny portrait which has been on display since October was entirely politically motivated.

“It’s a political decision because there is no article (within the law) specifying the size of the portraits beyond that that the King must be of equal or greater dimensions than the regional president,” he told news agency Efe.

“We are absolutely convinced that we have not violated any law. Both the portrait of the King and that of the President of the Generalitat (Artur Mas) are exactly the same size”.

Both the portraits of King Felipe and Mas are displayed side by side on the lintel above the door of the council chamber.

Barcelona city hall sparked outcry when its new leftist mayor Ada Colau removed a bust of the old King from city hall in July, describing it as an “anomaly” given his June 2014 abdication.