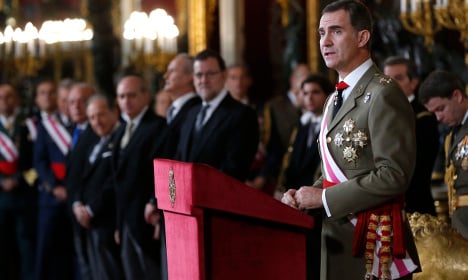 Although the December 20th elections failed to yield a strong majority for any party, and have led to gridlock in the negotiations over who will become the next prime minister, the king did not touch upon the political wrangling.

Instead he focused on the challenges that lie ahead for the armed forces, most notably the terrorist threat.

“We have been through tough times, some of them with tragic outcomes, such as the violence – the brutal onslaught – of terrorism, which has brought death to so many cities, streets and squares across the world, and that has cruelly hit countries that are our friends, where citizens and fellow Spaniards have lost their lives,” he said, alluding to attacks in France, Afghanistan, Tunisia and Lebanon.

“We should not become discouraged in the face of these assaults,” the king continued.

“On the contrary, those who attack our rights and freedoms must encounter a brave, united and firm response in defence of our own model of coexistence.”

The monarch’s speech was part of a ceremony that was first held on January 6, 1782, when Carlos III congratulated the Spanish troops for reconquering Menorca from the British.