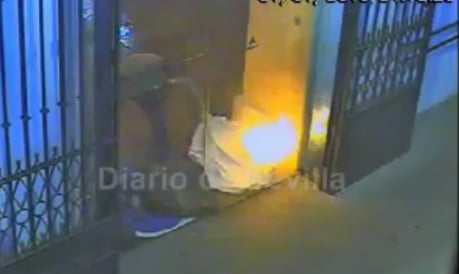 The arsonist, a 60-year-old man identified as Antonio V.L, has been arrested and charged with attempted murder and sent to prison on remand.

CCTV footage taken at 4.30am on January 1st in the doorway of a Caixa bank in Seville, shows the man stooping down in the doorway where another man is curled up sleeping and setting alight the belongings at his feet.

The camera, placed inside the bank, shows the arsonist furtively lighting a covering at the feet of the sleeping man and then walking briskly away as it starts to burn.

Within a minute flames had consumed the covering over what appeared to be a pull along shopping bag but the sleeping man lay undisturbed.

The sleeping man, who suffered severe burns in a similar incident at a different cashpoint last August. Was saved by a passerby who wrenched the burning items into the street and roused the sleeping man.

At the end of the video you see the victim – identified by police as Sebastian, 55 – climb out of his sleeping bag and walk unsteadily away.

The footage was published by local newspaper Diario de Sevilla.

The man charged with the offence was reportedly well known to police as a dangerous arsonist with a long history of previous arrests.