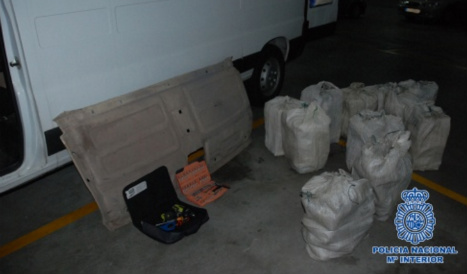 The seizure in the northwestern Galicia region was “the biggest for this type of drug on Galician soil since 1999″, the police said in a statement, without revealing when the operation took place.

The cocaine was bound for an important smuggling ring based on the Costa del Sol in southern Spain, the statement added.

“Twelve people were detained including those transporting the merchandise, who were Spanish, and the sellers and buyers of the drugs, who were Dutch and British respectively.”

Police said they had also seized guns and over a million euros in cash.

Spain's proximity to north Africa, a key source of hashish, and its close ties with former colonies in Latin America, the world's main cocaine-producing region, have made it a major gateway into Europe for drug consignments.

Last month, police said they had seized 40 pallets made out of 1.4 tonnes of compressed cocaine made to look like wood that arrived on a shipping container from Colombia.

And in November, police announced they had arrested Michael Roden, a suspected drug trafficking boss who is listed among Britain's 10 most wanted fugitives.

Roden, also known by his nickname “Dodge”, was wanted by British police in connection with the importation of 70 kilos of cannabis into Britain from Spain in 2013.

That same month, police also detained fellow Briton Robert Dawes, one of Europe's most wanted drug lords, who was arrested at his luxury villa on the Costa del Sol after an eight-year probe into his alleged links to the Italian mafia and South American cartels.

He has since been extradited to France, where he is wanted in connection with the discovery of 1.3 tonnes of cocaine in a Paris airport in 2013.

Spain's southern Costa del Sol — once dubbed the “Costa del Crime” — has been known as a hideaway for British criminals in the past, especially in the late 1970s and 80s when there were no extradition agreements with Britain.

But the situation changed in 2004 with the introduction of European arrest warrants, making it easier to bring British criminals home to face justice.