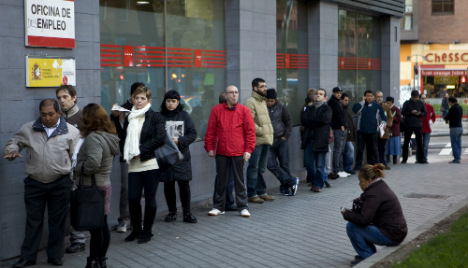 The number of jobless dropped by 354,203 to 4.04 million, the largest annual decline ever.

The labour ministry does not publish an unemployment rate, but national statistics office INE put the rate at 20.18 percent in the third quarter.

“The trend is very good,” Prime Minister Mariano Rajoy told Cope radio. “What we need to do now is to persevere.”

The fight against unemployment featured large in Rajoy's platform ahead of December 20th elections, in which his party lost its parliamentary majority and has now left him struggling to form a government.

In December alone, the number of jobless fell by 55,790, mostly thanks to temporary services jobs created during the festive season, the statement showed.

Broken down by sectors, jobless claims fell predominantly in services (-2.22 percent), followed by agriculture and fisheries (-1.09 percent), while they rose in industry (1.25 percent) and most notably in construction (3.53 percent).

Even after last year's drop, Spanish unemployment is still the highest in the eurozone after Greece's.