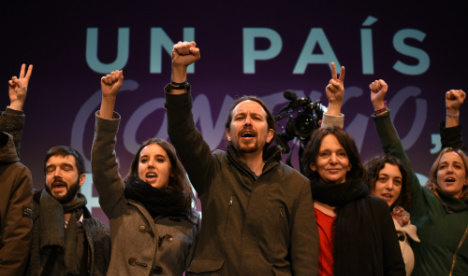 Podemos leader Pablo Iglesias (centre) and some of his party's MPs. Photo: AFP

The leaders of the party – now Spain’s third political force after a strong showing in the December 22nd general election – established a set of rules on which perks its MPs must reject during a nine-hour meeting on Sunday.

“All MPs must renounce privileges such as ex-parliamentary pensions, the €3,000 card for taxis and the payment of home internet, as well as limiting their salaries and the expenses received for housing and maintenance,” the party announced in a statement.

MPs from outside Madrid will only accept €850 ($916) of the possible €1,823 in housing expenses, while salaries will be capped at a maximum of three times the minimum wage – around €1950 – in line with other public sector workers.

But the money saved will not constitute a saving in public spending, according to Spanish daily El Mundo. Podemos are planning to channel the money back into the party and into social projects.

Podemos won 69 seats in Spain’s general election in December, a much better showing than expected. The party’s win contributed to the most gender equal parliament in Spanish history, as well as the election of Spain’s first ever black MP.

The MPs are not the first of the party’s public officials to give up their privileges.

Manuela Carmana, the mayor of Madrid who was backed by Ahora Madrid, left-wing coalition that included Podemos, has given up many of her mayoral privileges since taking office in May 2015.

She gave up her mayoral car, preferring to take the metro, and gave up the privileged VIP seats at the Madrid opera and the city’s iconic Las Ventas bullring.

The election result has caused political uncertainly, stripping Prime Minister Rajoy's conservative Popular Party of its absolute majority and unable to form a government without support from smaller parties.

So far both the PP's traditional Socialist rivals (PSOE), who came second in the elections, and upstart party Podemos have refused to support him.