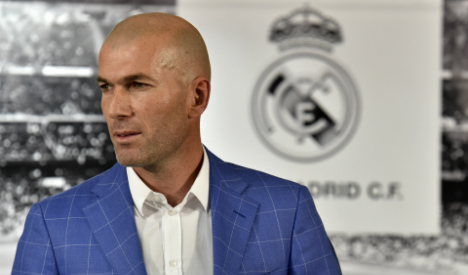 The three-time world player of the year takes over at the globe's richest club despite a limited coaching CV which includes his stewardship of Real's feeder team, Castilla.

But Zidane, 43, said he would do his utmost to make sure Real, currently third in La Liga after an unhappy spell under Benitez, land silverware this year.

“We have the best club in the world, the best fans and what we have to do now, and what I will try my best to do, is ensure the team wins at the end of the season,” said the Frenchman.

“I'm more excited now than I was when I signed as a player. I am going to put my heart and soul into this job so that everything works out well,” he added.

The length of Zidane's contract was not announced. He becomes the 11th coach to be appointed under Madrid president Florentino Perez, whose two spells in charge stretch to just over 12 years.

Perez said it was a “difficult decision” to part ways with Benitez, whose seven-month reign came to an end after Sunday's 2-2 draw with Valencia.

Benitez struggled to win over both Madrid's fans and their superstars including Cristiano Ronaldo and Sergio Ramos, in a stint that was also marked by off-field controversies.

Zidane inherits a team which is four points adrift of city rivals Atletico Madrid at the top of La Liga, and two behind nemesis Barcelona, who have a game in hand.

However, Real also qualified with room to spare for the Champions League knock-out stages, where they have been drawn against Roma in the last 16.

'Best person for the job'

All eyes will now be on whether the untested Zidane has the temperament and tactical ability to gel Madrid's Galacticos into a trophy-winning unit.

Zidane is not known for his communication skills, and his playing career ended with an infamous headbutt in the 2006 World Cup final.

But he is respected by Madrid's players and adored by their fans for his feats on the field, highlighted by his brilliant winner in the 2002 Champions League final.

“As president it is an honour to have you at my side because I know for you the word impossible doesn't exist,” gushed Perez.

Zidane failed to get Castilla promoted from the third tier of Spanish football last season, but they currently lie second in the regional Segunda Division B having lost just two of 19 games this season.

The Frenchman was also part of Carlo Ancelotti's coaching staff when they won the Champions League and Copa del Rey in 2014.

“The best person for the job,” trumpeted David Beckham, a former team-mate of Zidane at Real, on Instagram.

“Someone with drive, passion and also doesn't accept failure on any level… taking on a position that he will relish,” added the ex-England captain.

Perez had publicly backed Benitez despite growing pressure in recent weeks which saw him routinely jeered by his own fans, but he is believed to have finally bowed to the will of the players and supporters.

Right from the start of his reign in June, Benitez struggled to gain the respect of Madrid's star-studded squad with many senior players voicing their displeasure at the sacking of his predecessor Ancelotti.

A run of three league defeats in five games in November and December, including a 4-0 thrashing at home to Barcelona, wiped away the early credit Benitez had gained with an unbeaten 14-game start.

Further embarrassment was to follow when Madrid were thrown out of the Copa del Rey for fielding an ineligible player last month.

Real were also embroiled in a tit-for-tat war of words with Manchester United after the summer deadline-day £29 million ($43 million) transfer of the English club's goalkeeper David De Gea chaotically collapsed when the player was not registered in time – with each club blaming the other for the farce.

Benitez's relationship with the dressing room has also failed to improve with key players such as Karim Benzema and James Rodriguez often showing their disgust at being substituted.

Off-field distractions also took their toll with Benzema facing blackmail charges over a sex-tape, and Rodriguez accused of speeding at up to 200kph (124mph) before the Valencia game.