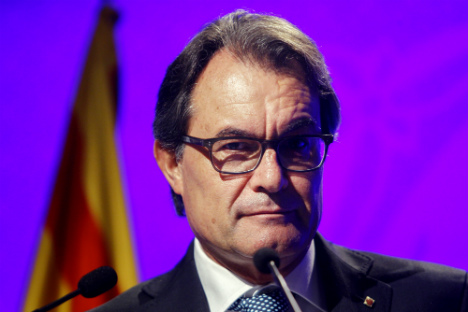 “I'm ready — against my will, this is not what we wanted and it is not what I want — but I'm ready to sign the decree to convene elections,” he told reporters in Barcelona, after different groupings within the separatist faction failed to agree on who should lead a new government.

Calling fresh elections — which would be the fourth since 2010 in Catalonia — would be a setback for the region's secessionist drive, which has been a major thorn in the side of Madrid.

The region's secessionist faction, which won September parliamentary polls, has been riven by in-fighting ever since due to a small, far-left separatist party that consistently refuses to give Mas the backing he needs to head up Catalonia again creating a deadlock that could lead to fresh elections.

On Sunday the CUP party announced once and for all that it would not back him as president, as the January 9th deadline to form a government approaches dangerously close.

Mas's “Together for Yes” secessionist alliance — helped by the CUP — won a majority of seats in the 135-seat Catalan parliament in a September election in the wealthy, 7.5-million-strong northeastern region.

In November, they approved a resolution calling for the creation of an independent Catalan republic within 18 months, laying down a major challenge to the central government in Madrid.

But the honeymoon was short-lived as “Together for Yes”, which won 62 seats, battled with the CUP to form a government.

Mas's coalition needs the backing of the CUP, which got 10 seats.

And after more than three months of negotiations, it failed to get the support of the CUP, which resents austerity measures implemented by Mas in recent years and his CDC party's links to corruption scandals.

The far-left party said it could back another candidate, but Mas's party has ruled that possibility out.

“I don't know if they realise the magnitude of the mistake they are making,” Mas told reporters.

But he said there was still time to reach an agreement of some kind before the deadline at midnight on Saturday.

“I want to say this very clearly though: 'Together for Yes' has already made so many proposals that we cannot make anymore,” he warned.

The CUP has said it could back another candidate, but Mas's CDC party – which is part of 'Together for Yes' – has ruled that possibility out.

The only option that remains is to convince a few CUP lawmakers to break rank and support them.

If they fail to do so, parliament will be dissolved after the January 9th deadline and Mas will call the elections.

“It's a risk because right now there are 72 separatist lawmakers,” said Ferran Requejo, politics professor at the Pompeu Fabra University in Barcelona.

“It could be that the result will be worse, because voters have seen that three months of secessionist majority in parliament has not resulted in a government agreement.

“That has resulted in the separatist factions running out of steam.”