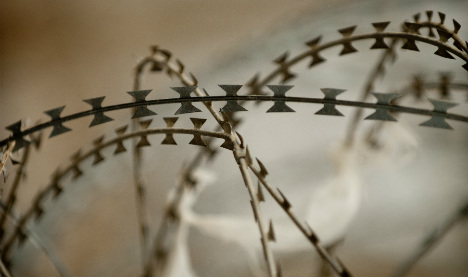 Razor wire on the fence at the Ceuta border. Photo: AFP

The deaths, which have been reported by NGOs working with migrants at the border, occurred on the Moroccan side of the border as some 200 people attempted to cross into Spain.

Witnesses said that they had seen at least three corpses floating in the water as Moroccan police attempted to prevent a group of around 200 people scaling the fences to reach Spain's north African enclave.

There has been no official confirmation from the Spanish Civil Guard at the border or their counterparts from the Moroccan side as to how many died.

In addition to the three reported dead, the NGO Caminando Fronteras said witnesses reported seeing several others injured during “very violent” clashes on Sunday night at the Spanish border.

A group of 17 African migrants were picked up by border police on a Ceuta beach early Monday morning having been transported there by an unseen vessel, Spain’s Civil Guard confirmed.

The latest incident follows that on Christmas Day when two migrants drowned at 12 others were hospitalized trying to enter Ceuta.