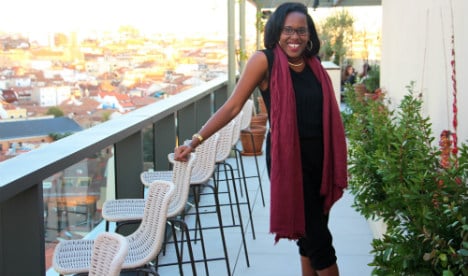 My first stint in Spain was four years ago when I was studying at Carlos III in Madrid. I ended up falling in love with the country and decided that I wanted to come back but for longer than just six months. I moved back to NYC, working in communications and marketing, then decided to take the leap again in 2014. It’s been two years so far and I couldn't be happier.

Tell us about where you live and what you love about it.

I live in Murcia, which is a city in the southeast region of Spain. It’s not very touristy and that’s something that I love about it. It allows for real opportunities to be immersed in Spanish culture and to easily meet locals. It’s an amazing city because it’s very affordable and also a great place to live and super easy to get around. Not to mention, a short drive outside of the city can bring you to beautiful mountain areas, vineyards, the ocean and much more.

What inspired you to start Las Morenas de España?

Las Morenas de España (LMDES) was actually inspired shortly before I moved back to Spain in 2014. I was googling black women in Spain and found that there weren't many resources… an outdated blog from 2008 or an article from 2011. Also, many of the stories I was reading were negative perspectives from individuals who were in the country for short amounts of time, not truly being able to be immersed in the culture. I knew there was a need for a strong, positive and real community that would change the narrative of what it’s like to be black in Spain. The site has grown to not just speak on experiences of WOC (Woman of colour) in Spain, but to also be a useful resource to many people who are living here or who aspire to move.

As for the name, the site is called Las Morenas de España, which can be translated to “brown women of Spain” but I really wanted to reclaim and embody the use of the word “morena” which some people might take offense to, if they are called that.

What is your experience generally of being a woman of colour in Spain?

To be honest, I've had a relatively positive experience being a woman of colour in Spain and I think it might have to do with the type of mindset that I came with when moving to the country. It’s important to realize that the culture is going to be different than where you came from. Many people see Spaniards as racist, but I think that they don't put as much emphasis on being politically correct as others do. You will have ignorant people, no matter where you go, but the most important thing you can do is decide how you will deal with each situation. Of course, there have been times when I rolled my eyes or brush something off, but, you move on and don’t let it hold you down.

What has most surprised you about starting your project in Spain?

I think the one thing that has surprised me the most is how much of a need there was for a platform like LMDES. We’ve gotten amazing responses from people all over the world, from all different backgrounds, that really love and support what we’re doing.

What do you love most about Spain?

I love that there is such an emphasis on actually appreciating and living life. Being here causes you to slow down just a bit and focus on what really matters.

And miss most about home?

I think what I miss most about home is my family but FaceTime helps a lot. Oh, and I definitely miss everything bagels with cream cheese.

How has your startup evolved and what are your future plans for LMDES?

LMDES has evolved on many different levels. We’ve grown to include bilingual articles, collaborate with many wonderful Spanish brands and the site reaches people in more than 145 countries. It's been wonderful to watch it grow and help people all over the world.

In the future, we’re looking to start a men's section on the site, organize more events all over the country and we’ll soon be launching LMDES getaways, which will be exclusive, curated group trips.

What is your philosophy on life and how has it helped you settle in another country?

It makes it all worth it.

Las Morenas de España, an online community that is redefining the black experience in Spain. The brand seeks to provide information, inspiration and encouragement for people of colour living here or interested in moving to the country.