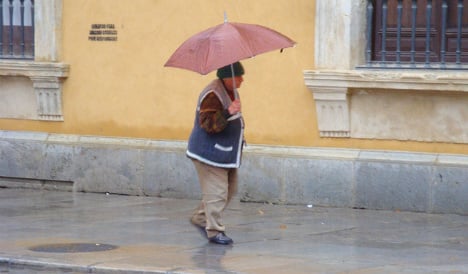 Seven of the provinces, all along the northern coast, are on orange alert for the severe risk of high waves and rain.

Cantabria, A Coruña, Vizcaya, Guipúzcoa, Asturias, Lugo and Pontevedra are all on orange alert, while temperatures are forecast to plummet in the northeast of the country.

The centre of the country is due for strong winds and heavy rain, which has seen Castilla y León put on yellow alert.

The combination of wind and rain has also put Cuenca, Avila, Burgos, Salamanca, Segovia, Zamora and Cáceres on yellow alert.

Much of southern Spain, including Granada, is on alert, while the Balearic Islands of Mallorca, Menorca and Ibiza are on alert for high waves.

In the Canary Islands, light clouds are forecast in the north of the islands, with a strong probability of light rain.

But for those planning on braving the stormy weather to watch a Three Kings Parade, don't forget to take your umbrella. Not only can they shield you from the rain but come in handy when it comes to collecting the sweets thrown into the crowds.