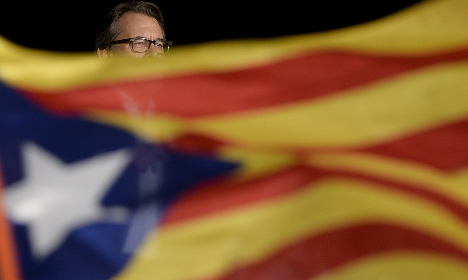 Catalan separatists on Sunday appeared incapable of forming a government following intractable divisions over the identity of the region's future president in a move likely to trigger fresh elections.

The crisis came to a head after a far-left Catalan separatist party said it would not back a new regional government led by outgoing president Artur Mas.

The announcement is a major blow for Mas, who has spearheaded Catalonia's drive to break away from Spain.

Separatists won a majority of seats in the 135-seat Catalan parliament for the first time in a September election in the wealthy northeastern region of Spain that is home to 7.5 million people.

Last month, they approved a resolution calling for the creation of an independent Catalan republic within 18 months, laying down a major challenge to the central government in Madrid.

But Mas's “Together for Yes” secessionist alliance, which won 62 seats, needed the backing of the smaller far-left separatist CUP faction, which won 10 seats, to form a government ahead of a January 9 deadline.

Ideological differences proved to be too wide.

“The independence movement has an absolute majority (within the region) but with this candidate… we cannot form a government,” CUP deputy Sergi Saladie told reporters following a meeting of the party's leadership where the
decision was taken.

The CUP, an anti-capitalist party that opposes NATO and EU membership, has consistently refused to back Mas because of his austerity policies of recent years and his faction's links to corruption scandals.

But Saladie said the party would not “close the door” if another candidate were to be proposed.

Instead, it sought to coax the CUP into backing it by promising a series of social reforms such as extra financing for homeowners facing eviction and school meals for poor children.

Failing an agreement between Mas' coalition and the CUP on a new candidate before midnight on Saturday, the Catalan parliament must call fresh elections, which would be a setback for the secession drive.

It would be the fourth round of elections since 2010 in Catalonia, which represents nearly a fifth of Spain's economic output.

Although the separatists were divided over the formation of a new government, in November they pushed a resolution through the Catalan parliament that calls for the creation of an independent republic within 18 months, laying down a major challenge to the central government in Madrid.

The divisions among Catalonia's secessionist camp appear to have benefited new anti-austerity party Podemos, which came first in the region in Spain's general elections on December 20th.

Podemos wants Catalonia to remain a part of Spain but is in favour of allowing an independence referendum in the region like the ones held in Scotland in 2014, and in Quebec in 1980 and 1995, which both resulted in votes for the “No” camp.

All other national parties refuse to allow a referendum, judging it unconstitutional.

Polls show that most Catalans support a referendum on independence but are divided over breaking from Spain.

Although Prime Minister's Mariano Rajoy's conservative Popular Party won the election, it lost its absolute majority, leaving it in the unprecedented situation of having to garner support from other parties to form a minority government.